The Internet seems to be a miracle. Composed of millions of pages accessible from nearly everywhere in the world, this marvel can be hard to unravel as a user. One user who has mastered this skill is Greg Stamm, who began his journey in Web design just four years ago.

“I started learning about Web development as a freshman,” Stamm said. “I thought it would be cool to be able to put something on the Internet, so I learned its complex art by studying on my own from books and other Web sites.”

Stamm had found his passion.

It wasn’t long before he acquired his first major Web project — managing the drama department’s Web site at his old high school in Derby, Kan. And by his sophomore year he had moved to North, taking on the Edmond North Key Club’s Web site. Not only did he significantly improve the quality of the site, but he founded a new officer position within the club — Web Designer. From great beginnings, Stamm furthered his career by beginning his own Web site at <https://stammwebcreations.com>, where he maintains a working portfolio.

Stamm’s experience with Key Club continued to open more doors for him in the summer of 2007.

“I heard from a softball coach that wanted to have a website where fast-pitch softball coaches from all over Oklahoma could collaborate, plan games and get information,” he said.

He had acquired his first happy customer in a soon-to-be Web business. “We were quite impressed with Greg’s work on the Key Club site,” said Stan Irvine, Executive Secretary of the Oklahoma High School Fastpitch Association. “After several days of communication we signed a contract with him. He has designed the most effective means of communication between nearly 400 coaches throughout Oklahoma.”

And from great beginnings, Stamm’s clientele grew tremendously. He now manages over 10 Web sites, ranging from a model car company called T-Reproductions in Tennessee to a small business selling horses and border collies. Stamm has also received a number of awards for his Web design, ranging from both a third and first place prize for the Key Club Web site in the Texas-Oklahoma District (T-O) of Key Club International. The T-O district contains more than 280 high schools, virtually all of them with their own Web site.

But for Stamm, all of these projects are just the beginning.

“I am going to UCO to study in Web development,” said Stamm. “I plan to make a career out of this, and in 10 years, I see myself having my own Web business. What began as a hobby for me will be the key to my success in the future.” 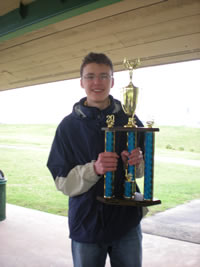 Basking in the spotlight: Senior Greg Stamm shows his first place prize for “Best Website 2009” within the T-O District of Key Club. 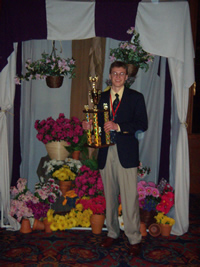 Basking in the spotlight: Junior Greg Stamm shows his second place prize for “Best Website 2008” within the T-O District of Key Club. 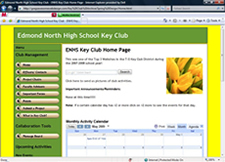